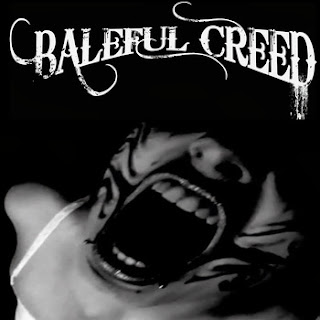 Now this is a funny one.Northern Irish hard rock quartet have just released their self titled debut album, which is of course a cause for celebration, as any new music from an awesome band should be.Except . . .

. . .It's not actually technically new music,more their first three EPs collected together in album format, and given a proper physical release.To some, it might seem poinless to review an album which consists of songs that I've already reviewed on a couple of occasions, but actually,'Baleful Creed' represents a perfect opportunity to revisit this sorely underrated Belfast quartet.It also enables me to use my notes from the previous reviews, which, seeing as I'm lazy, works out perfectly(only kidding,notes?!Ha ha ha ha).

For the unitiated, Creed deal in lead heavy, shit kicking hard rock that sounds like The Obsessed jamming on Black Crowes tunes, with a touch of Sabbathian doom and a strong grungy edge.Fronted by the gravel throated Fin Finlay, a man who sounds like he brushes his teeth with Jim Beam and rinses with razor blades, Baleful  Creed are no nonsense sort of chaps, eschewing fairy stuff like autotune  and synths and instead dealing in burnt out,fat stoner tone and massive fucking riffs.The strongest cuts on 'Baleful Creed'  stem from the band's most recent work, 'III':the granite edged Alice In Chains style stomp of opener 'Autumn Leaves' and the gritty briliance of 'Thorazine' just two examples, .'Double F.S' is the shit kicking party anthem Wino tried but failed  to write on Premonition 13's 'Deranged Rock and Roller', while 'Illuminati''s menacing chug and off kilter rhythms are simply killer.

The earlier, more melodic cuts still hold up well though.Current video single 'Crazy Man' is an anthemic widescreen  rocker, John Allen's earthy, soulful lead playing complimenting the granite hewn riffing perfectly.However,songs like 'Suffer In Silence'(ahem) suffer by comparison to more recent cuts, a sense of a band having not quite found their sound yet, and the almost gospel tinged climax to the song is, in all honesty, a little cringy on reflection.

As a collection of songs, 'Baleful Creed' is interesting if you view it as a barometer of how much Creed's sound has changed and evolved over the last couple of years, the band morphing from a Trucker Diablo style 'rawk' band into something darker, more complex and ultimately more exciting.Time will tell what route the band take next, however as it stands, 'Baleful Creed'  is either a perfect opportunity to revisit some awesome songs, or if you're a newcomer, a handy introduction to a great band.

For fans of Alice In Chains, The Obsessed, Orange Goblin, Fireball Ministry


Posted by BORNAGAINNIHILIST at 10:04 PM