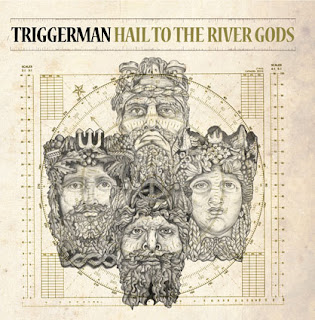 Formed in Derry, Northern Ireland in 2002, Triggerman have been relentless in delivering their own brand of acrid groove to a riff starved land, and in the process supporting such titans of hard rock as Mastodon, Orange Goblin and er, Dragonforce. This latest offering comes hot on the heels of the warmly praised 'Brand New Day', and suffice to say, after a decade at it, they've not lost a jot of grit, balls or charm.


Opening with the funk tinged boogie of 'Rage of The Goddess', 'Hail To The River Gods'  puts one in mind instantly of Maryland legends Clutch, with singer Baps' demented, colloquial prose wrapped around guitars that don't so much swagger in your room as whip it out and piss all over your Black Veiled Brides records.It might very well be a parallel universe where Neil Fallon and co moved to 'Norn Iron' and heavied it up instead of discovering the  blues and slide guitar, with an almost industrial edge to their jagged riffing that recalls early Soil.You know, before they were shit.

And it continues on in this vein, demented , blood and thunder missives spewed from the excellently named Baps , bearded, drunken men making scary , thrilling noise and toasting the ghosts of heavy metal's past and present. 'The Flower Of Life' could be the soundtrack to a sequel to 300, or else just an anthem for an extremely aggro lad's weekend,it's fiery, sea shanty refrain laid over a guitar riff that nods, only ever so slightly and respectfully, to (the) Melvins' 'The Bit' , while 'Wake The Dead' is designed to do just that, a gleefully snotty ode to getting pissed and boogie bad boy rock and roll.To be honest, there's not really one bad track on here, and the band have done the smart thing by keeping the track listing down, making sure the pacing's perfect.Add to that a gloriously skanky and nasty but still crisp and clear production, not too bass heavy but still with the right amount of kick to the guitar tone, and you have yourself  a ROCK album. Closing with the swampy slow burn of 'Blind Side Of The Moon', the band stagger off into the night, thankfully leaving your household pets and belongings intact, but with the decor shattered and holes in the wall, and all the booze stolen. Despite it all , we'd have them back for  a night cap, just eh, try and keep it down eh lads?

Posted by BORNAGAINNIHILIST at 8:31 PM